In April, Google invited us to participate in the 2013 Google Engage All-Stars Competition. Since then, we have made it a company goal to be grand prize winners and win the trip to Google Headquarters. 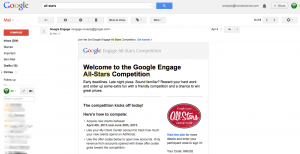 Since then, we have been busy, busy, busy in the third All-Stars Competition.

Google invites the top PPC marketing agencies in the United States, New Zealand, and the Americas with its performance based, Google Engage All-Stars award. On July 17, Funnel Science was announced one of the grand prize winners and a trip to Google Head Quarters.  And it seems that we have earned 2 letter Jackets as well.

Google Engage is a program created to support digital marketing agencies with Adwords, Analytics and Google Advertising. In 2012, we were winners and runners up to the grand prize.

Since last year, we have been looking forward to competing in this year and it is fucking cool as hell that we just won.  My wife Paige and I are taking the trip to Google and we can’t wait to get to Cali.

The competition started while we were in the final stages of launching our brand AdwordsExperts.com . As we grew our Google Adwords business, “we made it a company goal to be grand prize winners” said Alex Fender.

About the Author
Alex Fender is a Google Certified Analytics Consultant and is an expert in internet marketing. If you have questions or would like to contact him, he can be reached at (972) 867-3100. Google+